Expo We gaan het meemaken in the provincial house

Expo We gaan het meemaken in the provincial house 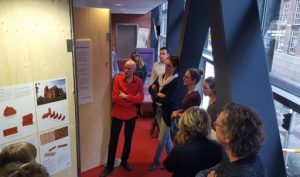 Guided tour by Eileen Blackmore
After the opening, Eileen Blackmore (House of Design) gave a talk. She explained about the project and showed the visitors around the exhibition. The tour started at the comic strip where children told why they would like to continue to live and work in the region in the future, and the comic strip also showed what the Maakplaats could mean here. This was followed by the materials research of the designers, with a personal explanation.

Maakplaats
Frank Zijlstra, who works at the province of Groningen, then told that he approached House of Design with the question whether she could make a recharging point from a local material, a ‘STOP contact’. A good example of a question that you can contact at the Maakplaats!

Groningen souvenirs?
Following the official part, there was an opportunity to ask the designers involved and the House of Design team questions about the project. It was asked whether it was possible to do a test in a room with the Simone Vermaning acoustic panels. It was also asked if we have Groningen souvenirs. This is not the case. We usually bring Groningen cake as a ‘souvenir’. ‘It would be nice if House of Design came up with something special!’

Proud
The exhibition and the interviews that took place during the opening gave staff at the provincial government building a good impression of the project ‘We are going to experience’ this project and its importance for the province. Staff were proud that the province has participated in the project and they would like to remain a partner in the future.