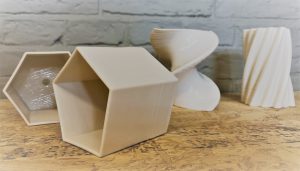 Students from three participating countries exhibited their work during the Craft Exhibition in Valencia in April. The exhibition is part of the European Days of Arts and Crafts.

3D printing with circular materials
Ten Dutch students from D’Drive and Friesland College participated. In the preceding period, they had made design objects according to the Craft Your Future principle. Masha van Kammen, for example, made objects with the WASP 3D clay printer supervised by ceramist Lies van Huet. This printer works with clay, but also with all kinds of circular materials such as cellulose and PHA from sewage sludge, bioplastics from potato starch and glycerin or a concrete from reed and lignin. 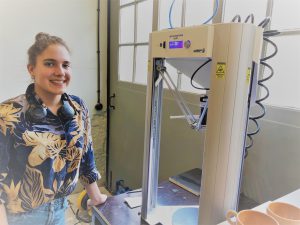 “I made the designs with the Vectorworks computer program and printed them with the WASP 3D clay printer. The pentagon shapes are the first designs I made with the clay printer. I chose these shapes because they feel asymmetrical, but they are not. I made the two twisted objects because I wanted something with porcelain that cannot be made by hand”, says Masha.

Model bearings
Pelle van Loon was one of the other participating students. For the exhibition “Fenduq” in the Fries Museum in Leeuwarden, Pelle was commissioned to make ball bearings for the traditionally reproduced engine blocks by Éric Van Hove, using new techniques. The model bearings that Pelle printed are also included in the exhibition in Valencia.

Craft Your Future is an educational European project in which Friesland College, House of Design and Learning Hub Friesland, together with partners from Spain and Bulgaria, combine old crafts with new techniques and connect them to the circular economy. Read more about the project here.

Kunstspot is looking for talented writers