‘A model that invites you to think and participate.’

‘A model that invites you to think and participate.’

Due to the current crisis surrounding Covid-19, we see that the local and the small scale is receiving more attention. This fits in seamlessly with House of Design’s vision: ‘What we want is that people learn to see the value – and to use – materials, manufacturing techniques and products from their own region. In smaller ecosystems, there is more involvement from the community, more cooperation and more consideration for each other. If there is mainly local production and people find solutions for waste and residual material themselves, working methods will be more sustainable. “- says Eileen Blackmore. 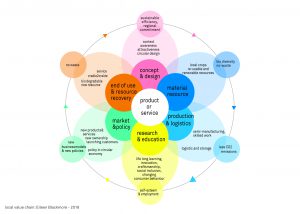 House of Design has been working with the local value chain model for several years. It is a model with which we develop local circular production chains. We link this to the effects on the environment and society. The values ​​we want to influence include connection to the region, no waste, biodiversity, fewer CO2 emissions, pride, employment, related policies and new revenue models. It is important that the chains are within a radius of 100 kilometres, so that the impact directly relates to the region.

In this interview, Eileen tells more about the local value chain model; how and why it came about, what benefits it has, what the reactions are and who we work with.

How did the local value chain model come about?
‘The local value chain model is the result of various encounters, collaborations and projects in recent years. The seed was planted during a meeting on Cradle to Cradle (C2C) in 2008. There I was introduced to the C2C principles and saw how a designer – by applying C2C in the method and choice of materials – can play a role in making products more sustainable. The designer often chooses the material they want to work with. It is therefore important that designers become ambassadors for sustainable materials and working methods. I saw a possibility for House of Design to play a connecting role. In 2009 we got the chance when Grand Theatre Groningen approached us with the request to have the foyer redesigned by a Groningen designer. This has been carried out and became a great opportunity to show a wide audience what is possible with C2C.’

‘The collaboration with Syntens (Ministry of Economic Affairs) and the meeting with Han Brezet (TU Delft) have also been very important for the development of the local value chain model. I set up Biobased Design together with Syntens, with a focus on fossil-free, renewable material and the material chain, which was then still in its infancy. Designer and producers of the new materials worked closely together. The role of the maker and the material became more prominent. Han Brezet introduced me to the province of Friesland, and then everything accelerated.’

What are the benefits of a local value chain?
‘Society used to consist of small ecosystems. I think a good example of such an ecosystem is the fishing culture in Zoutkamp. Many residents of Zoutkamp have traditionally been involved in fishing and this connects the community; one goes out to fish, another works on the maintenance of the ships or nets, while others are involved in the processing or sale of shrimps. As efficiency in European trade agreements has become increasingly dominant over the years, many of these small ecosystems have had to make way for large-scale industries. These are vulnerable: if a link disappears, this will harm the entire system.’

‘In smaller ecosystems, there is more involvement from the community, more cooperation and more consideration for each other. Because production mainly occurs locally and people find solutions for waste and residual material themselves, this way of working is also more sustainable. Communities are working together again with other communities elsewhere in the country or abroad.’

‘The local value chain can help to counter the (excessively) large scale and promote cooperation between regional and local ecosystems at the European level. Spreading production across different areas will prevent scarcity. In addition, raw materials are applied in new ways. An example includes the cultivation of rotational crops such as hemp and flax. We build sustainable and circular chains around these and other materials which contribute to the living conditions in the region and to the local economy.’

Is it a new model?
‘It is partly a very old model. In the past, craftsmen, fishermen and farmers would also work closely together and each had their own contribution in the chain. In the local value chain model, the starting point is that stakeholders play an important role in creating a circular economy in order to achieve a long-term impact on production and use.’
‘The local value chain originated from the value chain developed by Michael Porter. It is mainly focused on business operations. We have added the elements “local”, “knowledge and education” and “end of product”, and have created space for society and the government in the chain. Governments are closely involved in the process; they determine procurement rules and therefore play an important role in stimulating a circular economy. By adding local production and the use of regional raw materials as a requirement in these rules, entrepreneurs in the region are encouraged to act more circularly. In addition, the government plays an exemplary role as a launching customer. ‘

‘We have also increased the role of the designer to make sustainability visible, tangible and appealing with local elements in order to strengthen the connection with the region, making people proud of it. There is also a lot of room for connections and collaborations between stakeholders which are not so obvious on the face of it. In addition, House of Design connects social values ​​to the chain in which sustainability, employment, quality of life and creative design power are important pillars. These additions distinguish it from other models.’

Can you name projects in which the model has been applied?
‘Yes, there are already some examples. We use it in the Local Making Place project. This is an initiative of us to set up a local circular manufacturing industry around biobased renewable raw materials in the Wadden region. In Groningen, we are working on the design of the Circularity Hub. The municipality asked how it could define policies using the value chain. At the European level, there is Craft your Future, which focuses on education, linked to crafts and the local context, and we also involve the chain here.’

What is the response to the model?
‘A policy officer from the municipality of Het Hogeland noted that the model affects many segments of a community, including the economy, innovation, participation and knowledge: “It is an appealing and sympathetic model.” Designer Gerard de Hoop said that, as a designer, he finds it special to be part of a larger whole, to be one of the links in it, instead of making designs on his own. Farmers say that, in addition to their usual crops, they have become interested in growing other crops as raw materials for products. Logistics and production sectors have said that “we can continue to live in our own region” and “that the model offers opportunities to status holders “. The Graanrepubliek in Bad Nieuweschans mentions the reevaluation of grain and the possibility of applying local raw materials in a different way.’

‘At first, many people found my ideas abstract. Alderman Paul de Rook summarised our pioneering role as follows: “You see what is needed, develop a small project and show what we need. We will then make resources available and once they are available, you will have moved on”. Now that the concepts and projects have been shaped in the form of the local value chain, the applications are clear and they will appeal to the imagination. This has provided my vision with more structure and support. The local value chain has become a model that invites you to think and participate.’

Who are your partners?
‘At this point, they are mainly governments and schools, for example the municipality of Het Hogeland and the municipality of Groningen, Hanze University of Applied Sciences, Hogeland College and Friesland College. The company Hooghoudt and initiatives such as the Holm in Den Andel and Sport4Connect in Delfzijl are partners. Various schools want to link their lessons to the local value chain model.’

Are you also interested in the local value chain model or the projects in which we apply the model? Then contact Eileen Blackmore at: eileen@houseofdesign.nl.

more context >>
Nowadays, there are various approaches in which sustainability is the basis; there is Cradle to Cradle, in which the principle is that waste equals food; the starting point of the Blue Economy model is that there are closed ecosystems in which everything is interrelated; in the Performance Economy, the system is such that the producer remains the owner and the user only pays for the use; in the Circular Economy, the model stands for a circular economy in which no finite raw materials are depleted and residues are completely reused. In the local value chain model, the starting point is that stakeholders play an important role in achieving a circular economy in order to achieve a long-term impact on production and use in the region. <<

By Marjan in circulariteitshub on 30 June 2020